Blockchain technology is amongst the most secure networks in the world. However, they have a universe of their own. Retrieving data from outside blockchain without compromising blockchain security remained a question mark until Chainlink came up with its decentralized oracle blockchain.

Chainlink is a data provider that feeds blockchain (on-chain) smart contracts with trusted real-world (off-chain data) in a decentralized and secure setting.

Chainlink is trusted by tech behemoths like Google, DeFi leaders like AAVE, Synthetix, and yearn.finance. Listed in the World Economic Forum’s 100 most promising technology pioneers in 2020, Chainlink’s native crypto token – LINK, is currently the 10th largest cryptocurrency in the world as per CoinMarketCap data.

These Chainlink partnerships and achievements speak volumes of its credibility.

Reading this, you might wonder – What is Chainlink? How does it Work? What problem does it solve? Can I benefit from Chainlink staking?

Well, read along as this explainer post covers them all and much more.

What Problem Does Chainlink Solve?

The launch of Ethereum smart contracts in 2015 introduced a new potential of blockchain technology – the ability to decentralize almost everything.

Smart contracts are lines of code that execute prespecified functions if and when certain conditions are met. These contracts gave rise to decentralized applications (DApps) that live on the blockchain.

However, smart contracts faced a major obstacle – the inability to fetch data from an external (off-chain) source without comprising the blockchain (on-chain) reliability and security. Blockchain technology is amongst the most secured networks. However, it has a universe of its own. Fetching unreliable external data can compromise blockchain security.

Are you wondering why blockchain smart contracts require data from external sources?

A derivative smart contract that mimics the price of bonds will be valuable to users only if it can reliably track the price of the concerned bonds from real-world sources.

To answer your question, feeding smart contracts with real-world data will enable developers to build DApps for almost every purpose. 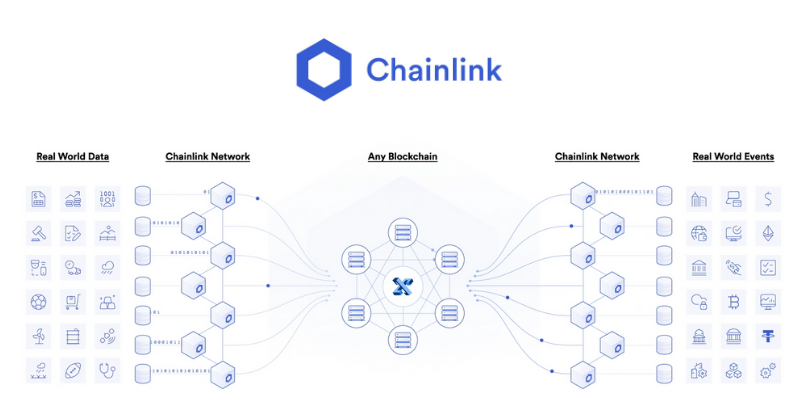 The Chainlink whitepaper was launched in September 2017 by co-founders Steve Ellis and Sergey Nazarov and the company’s advisor Ari Juels. The white paper described Chainlink as a ‘decentralized oracle network’.

Traditional oracle networks were governed by a central entity leading to a single point of failure. With Chainlink, there is no individual influencing the data. Instead, Chainlink has a network of independent oracles. Plus, to achieve decentralization, the data is collected from multiple sources, which is processed by several nodes. The nodes are economically incentivized or disincentivized based on data accuracy and are assigned a reputation score. In this way, Chainlink provides accurate real-world data to on-chain contracts.

Moreover, Chainlink is designed using integrated on-chain and off-chain modules that are further upgradable to match the evolving user requirements. Also, Chainlink is blockchain-agnostic which implies that it supports all major smart contract chains and not just Ethereum smart contracts.

LINK is the crypto token native to Chainlink. It is an ERC-20 token used to pay for services on the Chainlink platform. Chainlink data providers need to lock a certain amount of LINK tokens as collateral in their contract. This ensures they have their skin in the game.

How Does Chainlink Work?

From accepting data requests from its users to providing them with trusted data, Chainlink facilitates the communication between its users and off-chain data sources in three distinct steps –

In this step, the users specify their requirements in a service-level agreement (SLA). The users mention the required number of oracles, reputation score, aggregation contracts to be used, query parameters, etc.

Once the parameters are set, the users deposit the required LINK tokens in the Order-Matching contract. This contract accepts bids from oracles that fulfill the SLA requirements.

Now, the selected oracles connect with the off-chain data sources and collect the requested data in the SLA. This data is then processed by the oracles and sent to the Chainlink smart contracts.

Now that you are aware of the process, let’s glance through the Chainlink architecture.

As discussed, this contract gathers data from the oracles, assesses the validity, and returns the most accurate results to the smart contracts.

This contract matches the SLA to the best-bidding oracles.

As the name suggests, this contract checks the reliability of the oracles. For this, the contract scans through the oracle’s track record, including the number of completed requests, average response time, and the amount of LINK tokens locked in Chainlink smart contracts.

This component reads new SLA requests and forwards them to the Chainlink Adapter.

This is the bridge between the Chainlink node and the off-chain data source. Chainlink Adapter can read the data, process it, and write the data to the Chainlink blockchain.

Chainlink’s first priority has always been security. The fact that the startup has spent over a million dollars in security audits seems to verify this claim.

Data oracles are most used in DeFi services, which is currently more than 20 billion USD in locked assets. A slight difference in the price-feeds can cause millions in losses. Also, centralized oracles are at the risk of manipulation. The Libor scandal exposed how banks exploited the contract to polish their trading positions.

To achieve decentralization and security, Chainlink has employed various techniques. For instance, their Validation and Reputation contracts assess the integrity of the oracles. These contracts keep a complete tab and record everything including oracle behavior, user ratings, number of accepted requests, penalty payments, and average response time. Based on these metrics, the system prepares a complete report card of the concerned oracle and assigns tasks accordingly.

Moreover, to achieve decentralization and prevent any single point of failure, Chainlink uses data from multiple sources and a number of data oracles. Plus, the protocol uses secure hardware to strengthen the system further.

To ensure the integration of the result, Chainlink oracles collected data from multiple sources. Further, the sources are aggregated into a single answer and sent to the smart contract.

Chainlink provides users to collect data from multiple oracles to ensure its accuracy. Each oracle has a set of data sources, all the data sources are aggregated, and a weighted answer is sent to the SLA agreement.

Confidentiality is hard to achieve in an open-source distributed system as it is publicly visible. To establish confidentiality, Chainlink uses Intel’s recent Software Guard Extensions (SGX). This allows applications to be executed in an enclave, a secure environment.

LINK is an ERC-20 token native to the Chainlink platform. Oracles are rewarded in LINK tokens for providing off-chain data.

The Chainlink (LINK) ICO on September 19, 2017 was a huge success as it collected 32 million USD in just 2 hours. The protocol sold 29 million USD worth of tokens in the presale and less than 10% tokens were available for the public sale. The ICO distributed LINK tokens at 0.11 USD each.

Also, Chainlink is hard-capped at 1 billion tokens. According to CoinMarketCap, LINK currently has a circulating supply of 40,05,09,566 tokens.

You can purchase LINK tokens on various exchanges including Uniswap.

Unfortunately, you cannot earn a passive income by staking your LINK holdings as Chainlink staking is not live on the protocol yet. Nevertheless, you can still earn LINK tokens by running a validator node on the Chainlink ecosystem.

Are you wondering what to do if you do not have the technical knowledge about how to run a Chainlink node?

Well, the good news is you can stake your LINK tokens in node-as-a-service providers like Linkpool and earn rewards. Link pool allows you to stake LINK tokens on the Chainlink nodes running on their platform.

The Chainlink staking process on Linkpool is a no-nonsense, simple process –

That’s it! You are now ready to earn a portion of[1] [2]  validator rewards without having to run a node yourself.

Let’s look at some of the Chainlink partnerships in 2019 –

Synthetix is a derivative platform on the Ethereum blockchain that gives users access to crypto-assets, fiat money, commodities, stocks, and indices.

The platform has joined hands with Chainlink to enable decentralized price feeds across its trading platform.

Bodhi is a prediction market that was initially based on manual consensus mechanism. However, in February 2019, Bodhi partnered with Chainlink to improve its protocol.

Celer, founded by four Ph.D. holders, is a platform that enables fast, easy, and secure off-chain transactions and smart contracts. Celer will use Chainlink for its payment gateway.

Katallassos is a financial service platform backed by Reto Trinkler, a Forbes 30 under 30 alumni in the finance world. This platfrom has partnered with Chainlink to enable its smart financial contracts to access real-world data feeds via Chainlink.

Ocean is a data sharing protocol that connects people, industries, startups, governments with data and AI experts allowing them to build blockchain powered services. Ocean Protocol has integrated Chainlink to trigger certain transactions that are triggered by off-chain data movements.

Apart from the many Chainlink integrations, there are a few unconfirmed (white label) partnerships like SWIFT. Chainlink[5] [6]  presented a Proof of Concept for the banking ecosystem at SIBOS (a notable financial industry conference), after winning the Innotribe Startup Challenge award in 2016.

The concept drew the attention of banks of five banks (Barclays, BNP Paribas, Fidelity, Societe Generale and Santander). They fed the data into a smart contract that was used to make a payment, which further translated into a SWIFT pavement message.

How Chainlink Performed in 2020

Chainlink was recognized by the World Economic Forum in 2020. The forum named Chainlink in its 100 most promising Technology Pioneers of 2020. Bitcoin Lightning network and blockchain forensics firm Elliptic was also included in the list.

Chainlink’s founder Sergey Nazarov revealed that the platform was now integrated with 300 projects. Well, towards the end of 2020, Chainlink saw a new integration of its decentralized oracle blockchain nearly every day. From Nexo wallets to Crypto.com, countless DeFi projects joined hands with Chainlink. It has also collaborated with insurance providers like Arbol, ACRE, and Etherisc.

Moreover, Chainlink has continuously been striving to provide different types of data to blockchain smart contracts.

Most importantly, with Tezos and Polkadot adopting Chainlink’s technology, the platform is spreading its roots beyond the Ethereum DeFi ecosystem.

Chainlink is also strengthening its team with new hires. In 2020, Chainlink added two crypto luminaries into their team. Ari Juels, the chief scientist at RSA, one of the largest security companies, has now joined SmartContract in the same post. Juels was the one to formalize the proof of work consensus mechanism, now used by Bitcoin, Ethereum and others. He is the inventor of proof of retrievability.

The second prominent hire was Ben Chan. Ben was the Chief Technology Officer of Bitgo, the platform that powers 15% of BTC transactions, and never suffered a breach in five years.

Considering Chainlink’s major partnerships, new data, awards, and big hires, it is wise to say that 2020 was Chainlink’s year.

With the launch of smart contracts, Ethereum became a programmable blockchain where developers can deploy decentralized applications (DApps). However, the major obstacle between the expansion of the DApp universe was – How do blockchain smart contracts access reliable off-chain data without compromising blockchain security?

Talking about their native cryptocurrency – LINK, this ERC-20 token is used for services on their platform. Currently, LINK is the 10th largest cryptocurrency in the world, according to the CoinmarketCap data.

Are you wondering – Is Chainlink secure?

To achieve decentralization and security, Chainlink uses the following –

Thanks to Chainlink’s utility and security it is trusted by industry leaders like AAVE, Synthetix, and yearn.finance, to name a few. Also, as discussed, at the end of 2020, Chainlink collaborated with a new project nearly every day.

Considering all these, it is wise to say that Chainlink will reach new heights in 2021.